These pages are excerpts from the book "Robert Mills of Fairfax County, Virginia" by Anna Rosina Mills Duckworth and Peggy Spahr Brennan. Click here to download.

Disposition of the Warden Property on Mattawoman Creek

On September 3, 1790, Asa sold the property to General William Smallwood.19 The Smallwood family owned the tract of land named “ Christian Temple Manor,” which was adjacent to “ Cole” on Mattawoman Creek. General Smallwood inherited Christian Temple Manor prior to 1760. At one time, he owned over 5,000 acres of land in the Mattawoman Creek area, and had 56 indentured servants and slaves. Tobacco was the main crop of the plantation, probably known as “ Mattawoman Plantation.” A life-long bachelor, he amassed considerable wealth as a gentleman planter.

In 1760, he built his own home, “ Smallwood’s Retreat,” on the Christian Temple Manor tract. This is in the same area as the dwelling of our Warden ancestors. Smallwood’s retreat was still standing in 1934, but was not habitable. Descendants of his family bought the house and about 400 acres of surrounding property, set up a foundation to restore it, and turned it into a state park. Restoration work began in 1954. Part of the park grounds may well be sited on part of “ Cole” that belonged at one time to the Nelson/Warden family.

General William Smallwood was the highest ranking officer from the state of Maryland during the Revolutionary War – a two-starred Major General. He mustered his first troops from the state and commanded them for a period during the war. General Smallwood served in the Continental Army for eight years 1775- 1783. In 1785, he was appointed Governor of Maryland and served three one-year terms.

In the mid-1700s, Richard Warden and his brother, James began purchasing and leasing land along Powells Creek in Fairfax County, Virginia, in the region that would later become Prince William County. In 1756, James Warden, purchased 250 acres of land on the branches of Popes Head and Bull Run Creeks. These streams join at the southwestern county line between current-day Prince William and Fairfax Counties. The deed book containing the 1756 transaction is missing; however, we found where James sold the 250 acres to Thomas Hitch on September 19, 1768.27 Five years later, James bought the property back from Thomas Hitch on May 25, 1773;28 then, leased 50 acres of it to Sarah Hitch, widow of Thomas Hitch, on June 1, 1773.29 Terms of the lease allowed Sarah Hitch to live on the property for her natural life.

On July 24, 1762, James negotiated a lease of 100 acres from George Mason for the natural lives of himself and his two sons, Nathan and Elisha Warden.30 Richard Warden, his brother, witnessed the deed. This leased property was also on Powell’s Creek. According to terms of the lease, James was required to…”build a wellframed dwelling house of 16 square feet with an outside chimney within seven years of the start date, and plant an orchard of 100 winter apple trees at least 30 feet distance from each other, and 150 peach trees; a tobacco barne or house of twenty feet by thirty feet or other houses equal thereto, and keep the buildings in good order.” James and his sons were required to pay rent of 500 lbs. of tobacco per year.

Tobacco Barn on Smallwood Manor State Park, Marbury, MD; made of roughhewn
lumber in the construction of the period. Photo by Peggy Brennan, 2007.

Richard Warden purchased 150 acres of land with 18 acres of marsh (total 168 acres) adjacent to his brother, James’s property near the Potomac River along the south side Powell’s Creek on July 13, 1761.31 There was no indication what he used the property for, so we should presume he planted it in tobacco and corn crops. Asa Warden, youngest son of Richard, inherited this 168 acre parcel called “ Hosantons” when Richard died in 1773.32 Asa sold the property in 1794 to James Smith of Dumfries, Virginia.33

On July 5, 1762, Richard Warden leased 140 acres near Cockpit Point in Prince William County, Virginia from William Ellzey for the purpose of farming the land.34 The lease was similar to the one James Warden, Richard’s brother, negotiated with George Mason at about the same time. The lease specified:

“ Richard Warden of Charles County in the Province of Maryland, Farmer, annual rent of 12 pounds current money of Virginia… a tract of land containing one hundred & forty acres near Cockpit Point bounded [by] the whole breadth of the land on Potowmack [sic] River & up the dividing line between Ellzey & Mason, from the fi rst day of November now next ensuing during the natural lives of the said Richd Warden & Mary and Ann Warden, children of the said Richard & the longest liver and survivor of them.”

Richard Warden was required to plant two hundred apple trees, to be provided by Ellzey, within three years…“also to build a convenient Barne…and to keep the houses already built, as also the orchards when planted in good repair, not committing any waste or spoil of the Timber provided…” 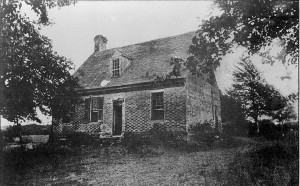 This photo of Gen. Smallwood’s house was taken in 1934 before it was dismantled and rebuilt. The house was originally built in 1760, and depicts the typical manor house of the time. The home of William and Margaret Nelson Warden would have been situated close to the home in the photo, and would have been built in the early 1700s. Photo: Library of Congress American Memories Digital Collection. 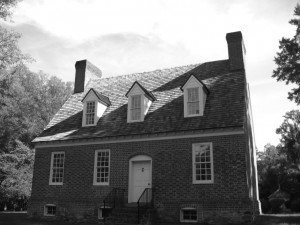 Smallwood Manor, as it appears today. Photo by Peggy Brennan, 2007.

Richard Warden was authorized to keep a sub-tenant on the land who was permitted to erect & build
proper houses & outhouses at his own cost. Ellzey agreed to pay for the masonry work on the dwelling house
to be erected for the sub-tenant. The deed was recorded on December 6, 1762.

It is uncertain which of the three properties Richard Warden actually lived on – the 117 acres of “ Cole” in Charles County, “ Hosantons Manor” (150 acres and 18 acres of marsh on Powell’s Creek), or the 140 acres at Cockpit Point, leased from William Ellzey. His will was fi led in Charles County, indicating he died there. He probably lived at “ Cole” and traveled to his properties in Virginia on a regular basis as an absentee landlord. It is apparent that when he leased the 140 acres, he established his two daughters, Mary and Ann, on property they could live on for the rest of their lives.

Mary and Ann Warden were listed by their maiden names in the will of their brother, Elijah Warden, in 1783, 21 years later.35 There were no other records that indicate what happened to Mary and Ann Warden, or when the leased land was returned to William Ellzey. Richard Warden died about 1773. His will was dated March 12, 1773 and probated August 9, 1774 in Charles County, Maryland.36 An abstract of the will reads as follows:

“To sons Elijah and Asa and daughters Martha, Charity, Sarah, Mary and Anna, my three Negroes, Robert, Samuel and David, after the decease of my wife, Agness.

To son Elijah Warden, 118 acres, being part of a tract “ Cole,” lying in Durham Parish; furniture, plates and saddle.

To wife Agness Warden, use of all my estate during her lifetime and then divided among the above seven children, Elijah Warden, Asa Warden, Margaret Warden, Charity Mills, Sarah Warden, Mary Warden and Anna Warden after the 5 shillings is paid to my daughter Euthan Martin.

Charity Warden Mills appears in her father’s will, above, already married to William Mills of Fairfax County. This is the fi rst proof we found for Rev. William Robert Mills’s writing that stated “ William Mills and Charity his wife,” were the parents of William Nelson Mills, 1783-1852.

In Elijah Warden’s will of July 28, 1783, he named his sister, Charity Mills, to receive some of his estate.37 Elijah left his personal property to his sister, Margaret Warden, and gave one shilling each to his brother, Asa, and sisters, Charity Mills, Sarah Warden, Mary Warden, Anna Warden, and the children of his deceased sister, Euthan Martin. It is interesting to note Elijah’s half of “ Cole” went to his brother, Asa when Elijah died without an heir. Elijah Warden enlisted in the Revolutionary War.

To summarize the discovery of William Warden, our earliest proven ancestor on the maternal line of the Mills family, we know the following: In 1698, William Warden left Elgin, Scotland for a new life in the 42 Mattawoman Creek area of Charles County, Maryland. He was a glover by trade. He courted and married a local young girl named Margaret Nelson, who lived with her parents, three sisters and three brothers on 436 acres of land along Mattawoman Creek. William and Margaret married about 1700, and lived on 117 acres of “ Cole,” property given to Margaret in her father’s will. There were three known children born to William and Margaret Nelson Warden. William Warden died about 1733 in Charles County, MD. Margaret Nelson Warden married again before 1735 to William Lloyd/Loyde, also of Charles County. She died about 1755.